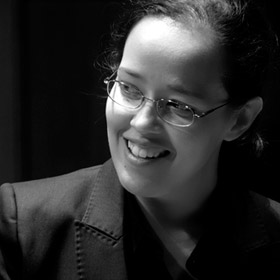 Angela Turner enjoys a multifaceted career as pianist and lecturer. Broadcast on Australian radio as soloist and chamber musician, Angela has performed extensively throughout Australia, and the UK, Canada and Taiwan. In recent years, highlights have included recordings and performances in the 4MBS Festival of Classics, Kawai Keyboard Series, Australian Piano Duo Festival, Queensland Symphony Orchestra Chamber Series, for Musica Viva, and broadcasts on ABC Classic-FM and the MBS networks.

Angela currently enjoys a focus upon chamber music, most notably with the Lyrebird Trio, who were winners of all piano trio prizes at the 2013 Asia-Pacific Chamber Music Competition. Recent engagements have included appearances at the Melbourne Recital Centre, Sydney Opera House, Ukaria Concert Series, and the Tyalgum, Mackay, 4MBS and Port Fairy Spring Music Festivals. In 2014 and 2015, Lyrebird Trio were Winter Musicians-in-Residence at Banff Centre for the Arts, Canada, and Ensemble-in-Residence at the Queensland Conservatorium.

Angela has been on staff at the Queensland Conservatorium Griffith University since 1998, where she is also head of the Intermediate Piano Program at the Young Conservatorium. An AMEB Keyboard Examiner and Federal Syllabus Consultant, Angela is a sought-after adjudicator and presenter around Australia, and is a Series Author for the publishers Hal Leonard. Angela was manager of the Encounters: Meetings in Australian Music 2005 project for the Queensland Conservatorium Research Centre, which was awarded two AMC/APRA Art Music Awards in 2006 for Outstanding Contribution to Music in Australia by an Organisation.

A graduate and Conservatorium medallist of the Conservatorium, Angela completed her Master of Music on exchange at the Royal College of Music, London. She has recorded numerous CDs, most recently for the Melba Recordings and Master Performers labels, to national and international critical acclaim.