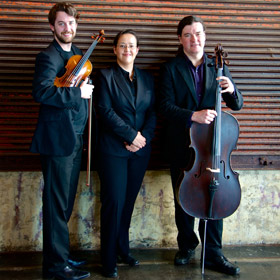 The Lyrebird Trio is comprised of Australian musicians Glenn Christensen (violin), Simon Cobcroft (cello) and Angela Turner (piano), all distinguished graduates of the Queensland Conservatorium. Formed in early 2013, the trio takes their name after the remarkable Australian native lyrebird, also an important emblem of their alma mater for much of its history.

In July 2013, Lyrebird Trio won all piano trio prizes at the quadrennial Asia Pacific Chamber Music Competition: the Beluera Prize for best piano trio, and the Peter Druce Audience Prize. Subsequently, they featured in the ABC International documentary “Ivory, Strings and Bows”, broadcast in over 40 countries across Asia, North America, the Pacific and Indian subcontinent. As Winter Musicians-in-Residence at the Banff Centre for the Arts, Canada, they gave numerous performances across the region in January/February 2014. The trio made a welcome return to Banff in January/February 2015, recording their debut CD for the Master Performers label.

Outside of the trio, Glenn Christensen is a member of the Australian Chamber Orchestra; Simon Cobcroft is Principal Cello with the Adelaide Symphony Orchestra, and Angela Turner is a lecturer at the Queensland Conservatorium, Griffith University.