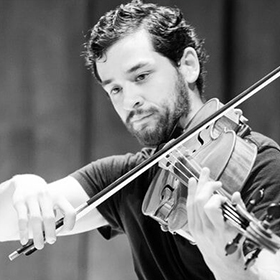 Nathan Greentree took up the viola in 2012, having previously studied the violin with Charmian Gadd. In 2015, he completed his Bachelor of Music (Performance) at the Sydney Conservatorium of Music, under the tutelage of SSO Principal Violist Roger Benedict. During his time at the Con, Nathan performed as Principal Viola in the Conservatorium’s Chamber, Symphony and Opera Orchestras and was the recipient of the Frank Hammond Merit Scholarship and the Helen Bainton Award.

From 2012-2015, Nathan was a member of the Sydney Symphony Sinfonia and in 2016, he was the first person to be selected into the Australian Chamber Orchestra’s Emerging Artist and Sydney Symphony Orchestra’s Fellowship programs in the same year. As a result, he was fortunate to tour and perform alongside incredible musicians such as Pekka Kuusisto, Pinchas Zukerman, James Ehnes and Meta4 string quartet.

Nathan loves playing chamber music and in 2014 and 2015, he attended the Estivo Chamber Music Summer School in Italy as part of the ‘4’ String Quartet. Whilst there, they performed in Verona and Mantova and received intensive lessons with the Goldner and Amaryllis String Quartets. Since 2017, Nathan has performed with the Brisbane group, Ensemble Q with whom he has collaborated with Greta Bradman, Dale Barltrop, Paul Dean, Daniel de Borah and Principal members of the QSO. Nathan regularly appears as a guest musician with the ACO and SSO. In November & December 2018, he was invited to perform in the role of Assistant Principal Viola with the Helsinki Philharmonic Orchestra.