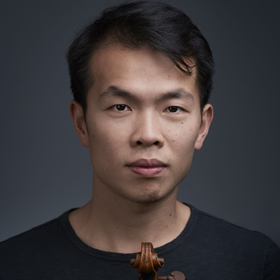 Ike began his musical journey at the age of four, studying first with Sylvia Khoo and later on with Qian Zhou. In 2006, he was accepted into the Curtis Institute of Music under the tutelage of renowned violinists Joseph Silverstein and Pamela Frank, graduating in 2012 with a Bachelor of Music.

Ike has appeared at numerous festivals including the Australian, Amelia Island, and Singapore Chamber Music Festivals, Kirishima International Music Festival, and Singapore Arts Festival. In 2011, he was invited to perform chamber music across Europe as part of Curtis on Tour, collaborating with his peers and distinguished faculty members.

A passionate chamber musician, Ike studied with members of the Guarneri, Orion and Vermeer Quartets, and has shared the stage with musicians such as Roberto Diaz, James Dunham, Karen Gomyo, Susan Graham, Clive Greensmith, Gary Hoffman, and Anthony McGill. Ike was previously Associate Concertmaster of the Adelaide Symphony before joining the ACO as a core member in 2014. He plays on a 1590 Brothers Amati violin on generous loan from the ACO Instrument Fund.