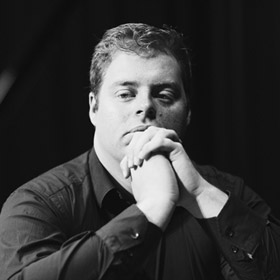 Stewart Kelly is a pianist of great versatility who is sought-after as performer, teacher, broadcaster, producer and artistic director. Based in Melbourne, he is on the staff of the Victorian College of the Arts Secondary School and is artistic director of the Music by the Springs festival and has previously directed the Melbourne International Festival of Lieder and Art Song and for seven years directed the Con Brio concert series at the Arts Centre Gold Coast.

He collaborates with many of Australia’s leading instrumentalists and singers and has particularly frequent partnerships with violinist Glenn Christensen, pianist Laurence Matheson and soprano Greta Bradman. He has performed in many leading Australian venues, at Festivals in Tasmania, Hepburn Springs, Mackay, Townsville, Brisbane and Coramba and internationally in New Zealand, China, Italy and the USA.

Stewart has been broadcast widely, with numerous concert broadcasts (including live-to-air recitals) for 4MBS, ABC Classic and 3MBS. He has recorded for the ABC and Melba records.

Stewart is a graduate of the Queensland University of Technology, the Queensland Conservatorium Griffith University and the Australian National Academy of Music. He holds a Bachelor of Music with distinction and a Master of Music Studies. His principal teachers were Gillian Wills, Diane Selmon, Stephen Emmerson and Timothy Young. In 2014 he was a Fellow of the Australian National Academy of Music, Australia’s most prestigious music training institution.

In 2020 he directs Music by the Springs for its third iteration and returns to Beleura House, the Coffs Harbour Conservatorium Sunday Series, the Cygnet Concert series and attends the Mackay Chamber Music festival for the third consecutive year.

As a broadcaster, Stewart presents the program “Melbourne in Concert” on the 3MBS network in Melbourne.